After several years of negotiations, countries have taken a major step against illegal, unreported and unregulated fishing (IUU), one of the greatest threats to sustainable fisheries and related livelihoods.

International guidelines developed through an FAO-led consultative process aim to cut down on IUU fishing by improving the accountability of flag states - those countries which register fishing vessels and authorize them to fly their flags.

The Voluntary Guidelines for Flag State Performance were agreed upon after over five years of consensus-building among FAO Member Countries. The guidelines will be presented to the FAO Committee on Fisheries (COFI) for endorsement at its next Session in June, 2014.

The guidelines include recommended approaches to encourage and help flag states comply with their international duties and obligations regarding the flagging and control of fishing vessels. They also present possible actions in response to non-compliance. >>> more
Posted by Kwesi Moore at 2:25 PM No comments:

Mr. Kwesi Ahwoi, previous Minister in charge of Ghana’s Ministry of Food and Agriculture (MOFA) dramatically changed his tune when he handed the reins over to Hon. Kofi Humado.

In his handover speech he charged Hon. Humado to “minimise if not eliminate the importation of rice and to reduce import of livestock products by 40 percent … in the next four years of his leadership.”

It will be remembered that Mr. Ahwoi made two very specific promises during his reign as Minister in charge of MOFA. >>> more
Posted by Kwesi Moore at 10:13 AM No comments: 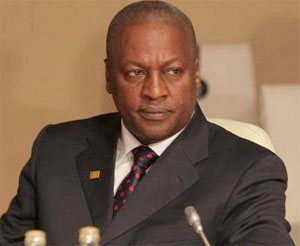 President John Dramani Mahama has delivered his maiden State of the Nation’s address to the Sixth Parliament of the Fourth Republic.

The address is in line with Article 67 of the Constitution, which mandates the President, at the beginning of each session of Parliament, deliver a message on State of the Nation. Below is what the President said on the Country’s Agricultural Development.

“Mr. Speaker, all of our accelerated development efforts have been geared towards giving special advantage to accelerated agricultural and aquaculture development through Modernization.

The process of modernization, involving the use of improved seed varieties, greater access to tractor services and training of peasant and small holder farmers on productivity enhancements, has resulted in dramatic increases in maize, rice and cassava production in the last four years. >>> more
Posted by Kwesi Moore at 9:40 AM No comments:

Every year,during the lent season, fish is the hottest commodity in many European countries. This has created what has popularly become the Battle for Fish which is led by major shipping companies which ply the West African route. Since many African countries do not have sea patrols to control trawling in their territories, many developed countries are using especially the north-west African coasts as their main territories.

According to the United Nations, up to 90 percent of fishing done in the West Africa is not run by local boats. The EU for several years has contributed to this huge devastating complicity. Every year EU countries fish from the waters of Senegal or Mauritania tons of tuna, mackerel or sardines. Each of the super trawler pulls 300 tons (273 kilogram) of fish on board - daily.

A documentary by Greenpeace reveals the devastating effect of these super-trawlers which ply the west african waters regularly. (documentary is in German)

But a number of trade barriers and restrictions are holding that dream in check.  They keep the cost of food high for consumers and the price of yield-boosting fertilizers and seeds beyond the reach of small farmers.  The World Bank says among those worse affected are landlocked countries like Burundi, Malawi, Zambia and Uganda, where prices may be 20 times higher than coastal states. >>> more
Posted by Kwesi Moore at 11:43 PM No comments:

What can be expected from the new food and agricultural chief?

The Ministry of Food and Agriculture (MOFA) in Ghana will be headed by a new chief or Minister, Clement Kofi Humado, and the question on the mind of interested parties is what changes he will introduce or whether it will be business as usual.


Clement Kofi Humado is the Member of Parliament for the Anlo constituency in Ghana and was also the Minister for Youth and Sports in Ghana prior to his new appointment.

During the vetting sessions in Parliament Mr. Humado gave some indications, as reported in the media, of his focus or priorities for the food and agricultural sector.
Firstly he advocated the use of Genetically Modified Organisms (GMO’s) in commercial farming to boost the country’s food security. >>> more

A new report has observed that most African economies are making consistent progress in improving business regulations.

The World Bank-IFC report released October 23, 2012 finds that of the 50 economies making the most improvement in business regulation for domestic firms since 2005, 17 are in sub-Saharan Africa and Ghana was included in the list despite slipping to 64th position in the global doing business rankings.>>>more
Posted by Kwesi Moore at 12:15 AM No comments: